This past Thanksgiving was the first time the actual dinner was hosted at my home. My previous years were spent with extended family at their houses. Over the course of my life, my final destination for each Thanksgiving has changed with the passing of older relatives and the development of my own adult life.

We had a bunch of people over our house; I think about twenty-five. Three of my relatives were in attendance, including the first time my parents had seen each other in years. SkinnyBitch had three relatives as well, while DeepEnd had five. We hosted about ten of our kinky friends and a few of their children. It was a very full house.

Our day started early, with DeepEnd & SkinnyBitch rising at 4:45am to put the turkey into the oven. This bird was, I shit you not, the size of a small child. SkinnyBitch had ordered a thirty pound bird, but the farm did not have any in that size. Instead DeepEnd picked up at 38.5lb beast of a turkey.

I happened to wake up at 4:48am, coughing because my throat was dry. I crept downstairs to fill my water bottle and found them prepping the turkey, marveled at it’s enormity, and took a picture for posterity. 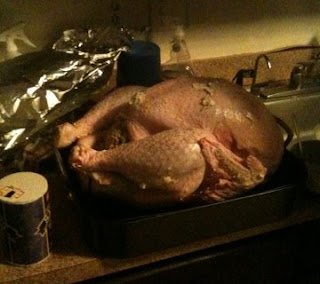 where can i buy accutane in stores Note the Morton’s salt canister for size reference.

http://rhythmsfitness.com/2017
With the bird in the oven, SkinnyBitch & DeepEnd returned to their spots on the couch in the Family Room while I went back to bed. About thirty minutes later, though, we were woken up by the sound of the smoke alarm. Quickly rushing into action, all three of us hoping to not disturb the rest of the house, we set up a fan by the alarm, opened the garage door, and lowered the temperature on the oven. This would not be our only occurrence of smoke issues that day.

Up for good this time at 10am, I made a quick supplies run to the grocery store before heading to my hometown to pickup my mother. I arrived back at the house around 1pm. My mother fell into conversation with SkinnyBitch’s mother, thank goodness, and the turkey soon came out of the oven. 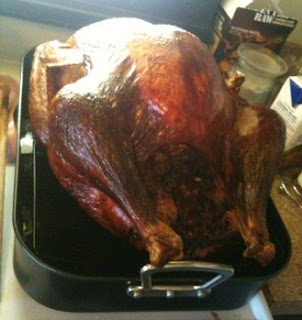 I helped out SkinnyBitch as much as I could around the kitchen, though with more food arriving with our guests the majority of the cooking was complete.

Our kinky friends slowly filtered in, along with the relatives who had not slept over Wednesday night.

The next big moment was the carving of the turkey. 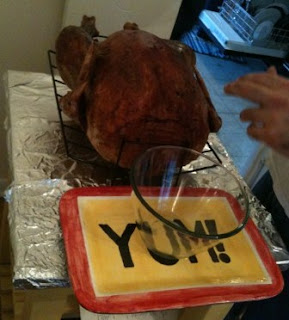 I made that platter; it seemed appropriate.


This task fell to DeepEnd, who first setup a station in the Dining Room, and then began his work. 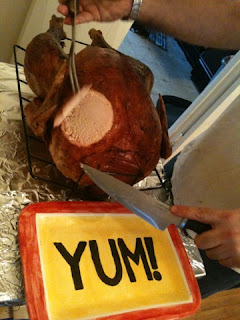 I especially liked this part of the day as I had no shame in my love of the turkey skin and DeepEnd had no qualms about giving me almost every juicy inch of it. (Oh yeah, that’s what she said.) I shared the bounty of the deliciousness with MollyRen, my mother, and SkinnyBitch’s Mom. 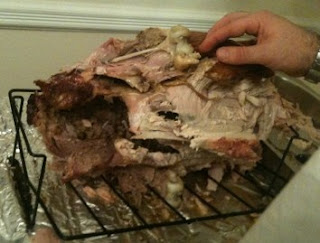 As dinner time approached, and more food as well as another table arrived, the roommates and I setup the buffet style meal in the kitchen.

The kids got their food first, and with the option of either sitting with the adults or taking their food downstairs to the basement, grown-ups it seemed were less appealing than a cache of Nerf guns.

After the kids, the rest of us dug in. With so much food, my first plate was only the veggies; my second round was the meat. My mother had brought a ham, we had tons of turkey, and the stuffing and dressing were to die for. SkinnyBitch is an excellent cook.

Though of course this was not on purpose, the dinner found us all separated by vanilla and kinky. For seating, we had arranged our Dining Room table in such a way to maximize the flow of foot traffic. SkinnyBitch and I made a Target run on Wednesday and picked up two folding tables and eight chairs. Our kinky friends had all been warned to bring their own seats, just in case. The family members stayed at the smaller Dining Room table while our kinky friends sat at the Target tables.

As the meal progressed, we soon moved on to desserts. Our kinky friends were asked to bring either a dessert or wine. We received two pies, a baking dish full of brownies, and seven bottles of wine. We finished four bottles of wine, half of each pie (apple & cherry), but all of the Godiva chocolate brownies.

After the meal, SkinnyBitch had already made it known she wanted a fire in the Family Room and to sip hot cocoa. DeepEnd attempted to set a fire, but instead found yet another instance of the smoke alarm going off. We opened windows and nixed the fire for that evening.

Slowly, the get together dissapated. Room assignments were already made for the evening, putting me on the couch with SkinnyBitch and DeepEnd.

With everyone cleared out who was not going to sleep over, I nestled into the soft couch cushions, played some Jack Johnson on my iPhone, and drifted off to sleep.